A Peek at the Legendary Life & Gardens of Bunny Mellon 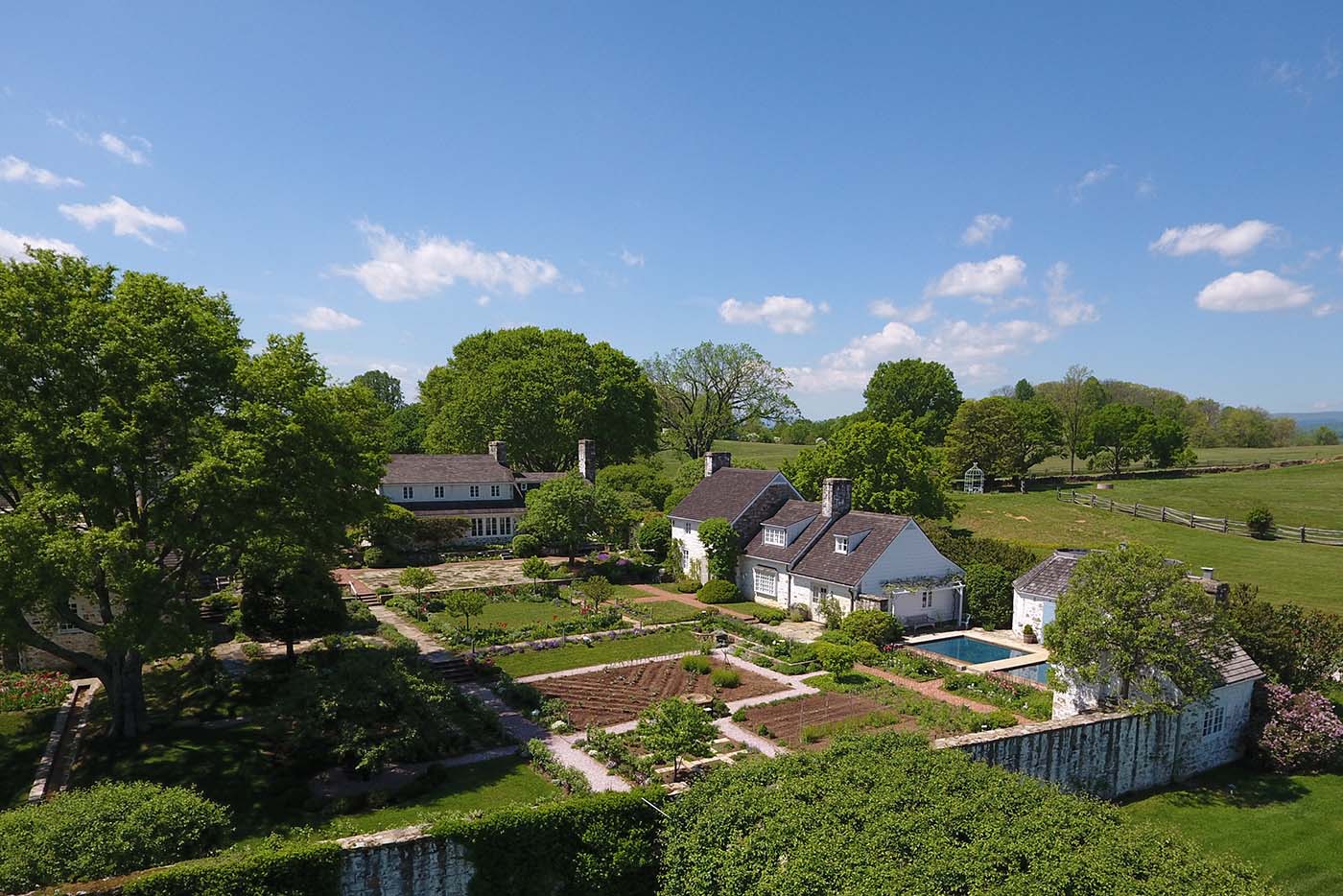 Pulling into the heart of Virginia’s horse country at dusk, I’m just in time to catch the sun slipping behind the tree line at the back of a nearby farm. I park and walk up to the split-rail fence, startled by the sound of a horse who must be very close. It’s an exhale, as if to signal his approval of the view.

It’s also the perfect welcome and a reminder that the magic of this area comes from a shared love of the land and an almost spiritual reverence for these mysterious, powerful animals.

I’ve come here to write about the legendary Oak Spring Farm in Upperville, Virginia, the home of philanthropists Paul Mellon (1907- 1999) and Rachel “Bunny” Lambert Mellon (1910-2014). Thanks to a gracious invitation by Sir Peter Crane, president of the Oak Spring Garden Foundation, the non-profit charged with preserving the estate and promoting educational outreach, I’ve arranged to tour the Mellon farm first thing in the morning.

Some background. Paul Mellon, son of industrialist Andrew Mellon, was also a renowned horse breeder and art collector. Once considered among the top five wealthiest men in the world, Mr. Mellon’s Rokeby Stable was home to prize-winning racehorses, including Sea Hero, a 1993 Kentucky Derby winner. As patrons of the arts, Mr. Mellon and his father were instrumental in the creation of the National Gallery of Art in Washington, D.C.

Mr. Mellon’s second wife, Bunny, an heiress in her own right, was a highly respected horticulturist and garden designer, whose lush gardens at Oak Spring––as well as those at the couple’s other homes in Manhattan, Washington, Paris, Cape Cod, Nantucket and Antigua––reflected her reputation as a style-maker with impeccable, yet understated, taste. A close friend and confidant of First Lady Jacqueline Kennedy, Bunny Mellon was asked by President Kennedy to design the White House Rose Garden.

This part of Virginia sits an hour northwest of Washington, D.C. and is often referred to as the “Nation’s Horse and Hunt Capital.” Bucolic country roads connect Upperville to other iconic equestrian towns, such as Middleburg and The Plains, and each horse farm or estate has its own elegant or whimsical name.

“For a garden, hovering always in a state of becoming, sums it own past and its future,” she once said. “A garden, like a library, is a whole made up of separate interests and mysteries.”

The main house and outbuildings share a whitewashed stone cottage design and, while elegant, give little indication of the wealth of those who once lived here. With its gallery white walls and Mrs. Mellon’s signature, painted wood floors by artist Paul Leonard, the house has multiple sets of French doors that open onto the gardens––as if to say you’ll find the real home and life of Bunny Mellon outside.

Many of the staff who served the Mellons late in their lives have stayed to tend to the legacy of their beloved employers, known simply as “Mr.” and “Mrs.” On the day I visit, I’m part of a larger tour of Wellesley scholars there to study environmental and conservation issues. We are also joined by a trial group of four artists-in-residence to whom the Foundation has awarded the opportunity to live, work and be inspired at Oak Spring for several weeks.

Our tour begins in Mrs. Mellon’s “Basket House,” which sits at the end of a catwalk over a bright blue reflecting pool and houses her treasured collection of straw baskets. Peter Crane gives an overview of the property–– its significance as a kind of hands-on horticultural laboratory, then and now––after which we move on to a three-hour tour that seems more like twenty minutes.

The garden is flanked on three sides by deer-proof, whitewashed walls that allow for a blossoming mix of heat-hearty perennials and annuals, stately boxwoods and strategically clipped topiaries (another Bunny Mellon signature). Each corner has some feature that makes it feel like a distinct neighborhood connected to a larger, bustling city.

At the back of the garden wall are giant wooden doors with towering sunflower sentinels, opening to a long path leading to the greenhouse. Mrs. Mellon carefully planted, trimmed, and twisted parallel rows of Mary Potter crabapple trees along the way to create a shaded arbor that bursts with color each spring.

Mrs. Mellon is said to have delighted in the presence of an overly-confident weed or sprig of errant groundcover, and there are other surprises everywhere: steps tucked into the sides of buildings; vignettes of plants and flowers sitting in conversation as they’re buzzed by tiny yellow butterflies; beds devoted to nurturing new plants and honoring the old. Nothing is too precious, nothing is labeled, but each petal, each leaf is known well to the small staff of devoted gardeners.

I spend another hour strolling around taking pictures, wondering what Mrs. Mellon would think of a neophyte like me traipsing through these hallowed grounds. I think maybe she would be fine with it––as long as I walked with an appreciation for not just her garden’s storied past, but also for what it might yet become.

Special thanks to Sir Peter Crane, Nancy Collins and Max Smith of the Oak Spring Garden Foundation for sharing their wealth of knowledge and resources. Many thanks to Kassie Kingsley and Cricket Bedford for their valuable insights about the area. – LR

Change It Up! Pay It Forward! Become a Volunteer!