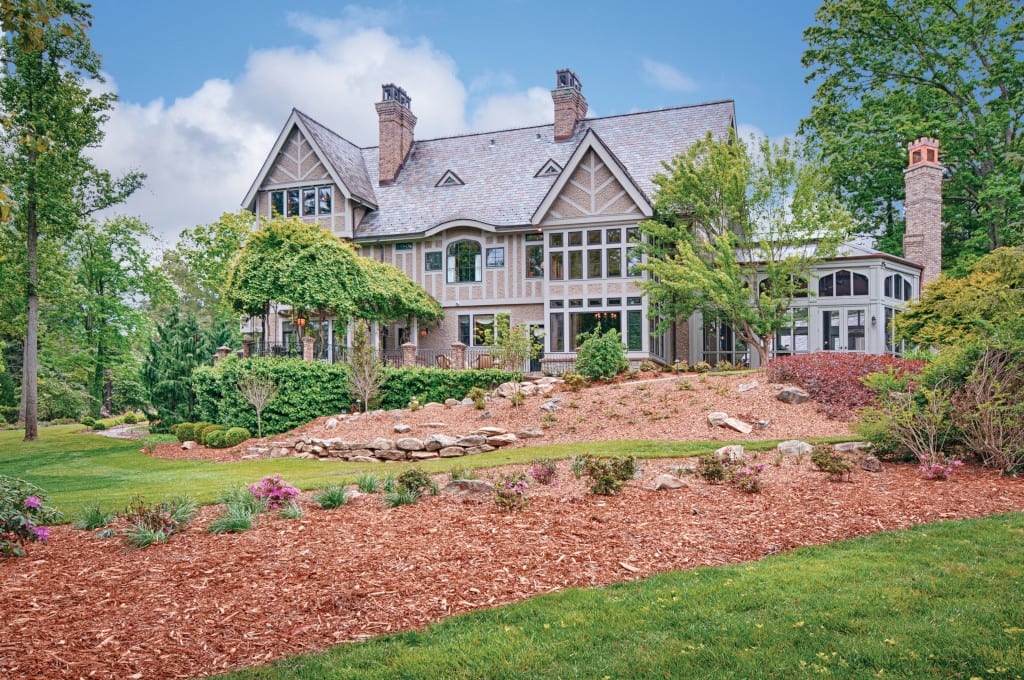 The home will always be thought of as Andie MacDowell’s, but Coby and Rhonda Orr have made it their own.

MacDowell, the actress from “Four Weddings and A Funeral” and “Groundhog Day” and is now a L’Oreal spokesmodel, built the almost 11,000-square foot French Tudor home in 1998. She lived in the home, which is on two adjacent lots that overlook the seventh fairway of the Biltmore Forest Golf Course, until she sold it for a move to Los Angeles in May 2012.

She was one of Asheville, N.C.’s most famous residents and was often seen dining and shopping in her adopted community.

“In Asheville, it’s known as her house,” Rhonda said, “but that’s Biltmore Forest where every house in here is known as someone’s house, either someone who lived there before or who built it. That’s just the nature of the neighborhood where everyone knows everyone, and that’s great.” The Orrs, who moved from Tampa, Fla., occupied the home in September 2012 after they renovated the kitchen, butler’s pantry and laundry room, painted the house, changed the light fixtures, sanded and restained the floors and remodeled the master bedroom and closet.

MacDowell, who is originally from Gaffney, S.C., hired Robert Griffin from Asheville’s Griffin Architects to design the home. The firm, which opened in 1979, is known for its historical remodels and neo-traditional designs.

“She was a delight. She is a sweet person who was wonderful to work with,” said Griffin, who has remained in touch with the actress since she sold the home. “She had decided she wanted Tudor. We gave her 15 to 20 copies of photographs from books on various styles of Tudor homes. She and her daughters, especially, decided on what I call a storybook Tudor.”

As MacDowell got older, the actress spent more and more time in the large home without her children. Something similar has happened with the Orrs. Two of their children, sons Wyatt and Jackson, are students at the University of Alabama, and their daughter, Mary Ellis, is a sophomore at Carolina Day School. The patio is a favorite outdoor space shaded by vines covering an arbor.

Coby, who sold a majority interest in Diversified Maintenance Systems before the family moved and now dabbles in other projects, found MacDowell’s home for sale online when the Orrs began to think of leaving Tampa.

In Tampa they lived in a gated community, and the thought was they again needed that security. Biltmore Forest isn’t gated but a town inside of Buncombe County with fewer than 1,500 residents, a police department, a public works department and a community feel.

Recently they put their home on the market. They would be content if the home never sold, the Orrs said. “We love the location and everything about the house,” Rhonda said.

One of the biggest changes to the five-bedroom, seven-bathroom home has been the addition of a screened porch, which was finished last winter. The Orrs moved furniture into the more than 1,000-square foot space two days before Christmas.

The porch was added to the back of the home, where once grass grew. Guests can pass through the door inside the two-story family room to meander on the porch, where a table is ready for a meal and furniture faces a wood-burning fireplace. The Orrs added a screened porch off the family room.

Though the family loves to watch their beloved Crimson Tide play on crisp autumn afternoons, they didn’t include a television in this family spot. “We’d rather play games, cards or just hang out by the fire,” Coby said.

This porch isn’t just a warm-weather space. Besides the fireplace, which is adorned with stonework and bricks in a herringbone design, there are several radiant heaters that hang on a header specifically built for them.

Winter might be too chilly to enjoy a cup of hot chocolate there, though the other nine months give the family and guests plenty of time to soak in the view of the golf course.

The room, which has a metal roof that differs from the slate tiles that cover the rest of the home, has large windows and skylights that pour natural light into the seating area.

One of Coby Orr’s favorite rooms in the house is the quiet sunroom, just off the entryway where arched windows allow morning sunlight to stream in – perfect for his Bible study time.

“We thought it was important to include the glass skylights along the ridge so that the original family room wouldn’t be dark because of the addition,” Griffin said. “We used the same Tudor arches and detailing, and Tudor cambered beam arch so that as you’re looking back at the house, you can tie into the house without changing the original exterior wall.”

Another major change was the master bedroom on the second floor. It was a small space, complete with a fireplace when MacDowell lived there, and the Orrs needed it to be larger. So they tore down the wall to the master closet and made the bedroom next door the new closet.

Now the master bedroom has a large space for furniture and an office space for Rhonda.

“For us, we wanted furniture in there so the five of us could hang out in there at night, watch TV and spend family time together,” she said.

The home’s stained glass front door opens to a spacious foyer and leads to a small sunroom on the right. It’s filled with a couch, two chairs, a chandelier and more than a dozen arched windows that fill the room with the morning’s light. Coby, who said this is one of his favorite rooms, is often found here in the mornings doing his Bible study and drinking a mug of coffee.

A new dining room and a small office are also off the foyer, and then the home flows into the remodeled kitchen. When it was purchased, the kitchen included a piano on one wall, older light wood cabinets and a small island.

The Orrs redesigned it so the entry into the butler’s pantry moved from the right to the left side of a large oven, a 12-foot granite-topped island became the focal point, and new cabinets were moved in.

“The kitchen was set up differently and wasn’t functional,” Rhonda said. “The kitchen flows well now. It’s great for a party because it’s where everyone ends up when you have guests. It’s easy to use and entertain and is great for our family as well.” The Orrs had the kitchen remodeled to be more functional, allowing better flow while entertaining guests.

The basement, which has four bunk beds built into the wall of the hallway, has two workout rooms. One of the rooms was a dance studio when MacDowell owned the home. An entertaining space fills the basement with a wet bar, Ping-Pong table and space to watch television and play video games.

The third floor contains more bedrooms, an office and another sitting area.

Outside the couple improved the landscaping. They left the arbor, covered with grape and trumpet vines for a distinct Biltmore Estate feel, for entertaining.

“I think they’ve personalized it and made it fit for their family,” Griffin said. “One of the greatest compliments an architect can have is when someone wants to move in and personalize a home. It’s nice to see them enjoying the home and using it for their lifestyle.” E

Shift Your Culinary Lineup this Season