The path of success for African American women in America is paved by those who pushed through impermeable barriers in the spheres of politics, science, athletics, business and the arts. They held themselves to the highest standards of excellence, earning the respect of their peers and changing the course of history. Here are seven of the most notable trailblazers: She was born to sharecroppers in Clarendon, South Carolina, but Althea Gibson honed her athletic skills as a youth in New York City, first as a paddle tennis champion and then as a tennis player. At age 23, she was the first Black player to be invited to play the Nationals (now called the U.S. Open), and her competent showing set the stage for what she would accomplish in the years to come. In 1957, she was the first African American champion at Wimbledon, a win so unprecedented that the Queen of England insisted on presenting Gibson with her award personally.  The subsequent year and a half were a blur of record-breaking wins. Before her departure from tennis at the end of 1958, Gibson won an unprecedented 56 singles and doubles championships. But she didn’t retire quietly. In 1964, Gibson broke another race barrier by becoming the first African American woman to join the Ladies Professional Golf Association tour, although her mastery on the green paled in comparison to her virtuosity on the court. Her accomplishments in tennis remained untouched for thirty years until the Williams sisters arrived on the scene in the late 1990s. “I am honored to have followed in such great footsteps,” Venus Williams famously said. “Her accomplishments set the stage for my success, and through players like myself and Serena and many others to come, her legacy will live on.” “Don’t sit down and wait for the opportunities to come,” entrepreneur Madam C.J. Walker was known to say to would-be entrepreneurs. “Get up and make them.” And the aphorism she frequently quoted was the very credo by which she lived. Born in 1967 to recently freed slaves on a cotton plantation in Louisiana, Walker was the first in her family to be born free. After spending time picking cotton and working as a domestic during her adolescence, she eventually joined her older brothers up north where they were working as barbers. After a scalp condition caused her to lose a significant amount of her hair, Walker developed her own line of hair care products that left her coiffe fortified and full. Before long, Walker’s potions were in high demand throughout the Northeast, and her customer base expanded throughout Latin America and the Caribbean. Walker spent years traveling around North America, selling her products and giving instructions on their use. In her 40s, she purchased a brownstone in Manhattan and became a glittering fixture on the cultural scene during the Harlem Renaissance. She dedicated her final years to public service, and was equally as generous in philanthropy as she was successful in business. While growing up in Carthage, Texas in the 1930s, Mildred Fay Jefferson was fascinated with medicine, and would often follow the local doctor around town on his house calls as he tended to the ill. After earning her Bachelor’s Degree from Texas College and a Master’s in Biology at Tufts in Boston, Jefferson attended Harvard Medical School. Upon her graduation in 1951, she was the first African American woman to earn a diploma from the most competitive medical program in the country. A few years later, Jefferson earned her board certification in surgery and became the first female doctor at Boston University Medical Center, and the first female member of the Boston Surgical Society. Throughout her career, Jefferson opposed abortive procedures, based on her own ethical response to the Hippocratic Oath (“first, do no harm”). She was a founding member of Massachusetts Citizens for Life and helped found the National Right to Life Committee. Jefferson’s foray into politics–which included three Congressional races– ended in defeat, but she was part of Reagan’s successful 1980 campaign for president. Reagan credits Jefferson with changing his own stance on abortion from pro-Choice to pro-Life during a discussion they had while he was governor of California in the 1970s. In 1939, Hattie McDaniel won the Oscar for Best Supporting Actress in Gone With the Wind, becoming the first African American entertainer to earn the distinction. But the award carried with it a barrage of criticism. Many black actors believed that McDaniel’s depiction of “Mammy” reinforced old stereotypes about race, while white audiences in the South complained that McDaniel’s headstrong maid was alarmingly “over familiar” with the white family for whom she worked. When the film premiered at Loew’s Grand Theatre in Atlanta in December of 1939, McDaniel was not permitted to attend because of the state’s segregation laws. When she attended the Oscars ceremony at the Coconut Grove Restaurant in Los Angeles in 1940, she and her escort were segregated from the white attendees, and placed at a small table in a remote corner of the room. “I sincerely hope I shall always be a credit to my race and to the motion picture industry,” said McDaniel in her Oscar’s acceptance speech. Indeed, during her 30 years in the entertainment business, McDaniel made more than 300 films, and also worked as a radio personality and a blues singer. And yes, there were times when she couldn’t find work in the business, so she took a job as a maid or a bathroom attendant. But in the end, she died in a big two-story home in Los Angeles that she bought with her earnings from the movies. The Hollywood Walk of Fame has two stars for McDaniel, one for her work in radio, and another for her work in film. But it took a few decades for the culture at large to recognize the value of McDaniel’s trailblazing legacy. In 2002, the film Beyond Tara, The Extraordinary Life of Hattie McDaniel (produced by Whoopi Goldberg) won an Emmy for “Outstanding Special,” and in 2006, McDaniel was featured on a U.S. Postage Stamp. When the Academy named Mo’Nique “Best Supporting Actress” in 2010 for her work in Precious, she recognized McDaniel in her acceptance speech and thanked her “for enduring all that she had to, so that I would not have to.” Toni Morrison once said, “If there is a book that you want to read, but it hasn’t been written yet, you must be the one to write it.” And who would know this better than Morrison? She went from being an editor at Random House–where she championed the work of emerging black writers–to being the most acclaimed American novelist of the 20th Century. Her book Beloved (about a black woman from the Antebellum South who murdered her daughter to save her from a life of slavery) was awarded the Pulitzer Prize for Fiction in 1987, and Morrison subsequently received the Nobel Prize for Literature and just about every accolade available in the realm of the Humanities, including the Presidential Medal of Freedom. More importantly, Morrison’s 11 novels (plus two plays, an opera, a collection of short stories and three nonfiction books) give voice to the complex, dignified struggles and triumphs of African American figures who would otherwise be overlooked. Sales of Morrison’s books soared into the millions when her titles were featured choices in Oprah’s Book Club, but if you’ve never read any of her work, we recommend starting with her first novel, The Bluest Eye and working your way through her work chronologically. 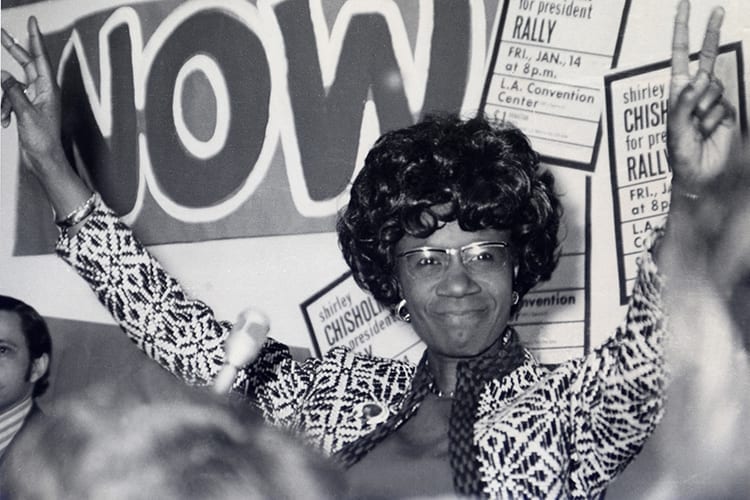 There are currently 19 African American women in Congress, and more than 70 black women have been elected to the legislative chambers in total, beginning in 1968 with a Democratic Representative from New York named Shirley Chisholm. After a career in early childhood education, Chisholm became interested in policy making and spent time in the New York State Assembly before running for national office. She served on the House Agricultural Committee, where she helped expand food subsidy programs for women and children. She was also part of the Committee on Veterans’ Affairs and became a founding member of the National Women’s Political Caucus in 1971. A year later, hoping to be the harbinger of a progressive chapter in American politics, Chisholm announced her historic candidacy for president. “I am not the candidate of black America, although I am black and proud. I am not the candidate of the woman’s movement of this country, although I am a woman and equally proud of that. I am the candidate of the people and my presence before you symbolizes a new era in American political history.” She later explained that her bid for the executive office (despite the hopeless odds) was “to demonstrate the sheer will and refusal to accept the status quo.” Even those who disagree with her politics, must concur that Shirley Chisholm’s tenacity is unassailable. 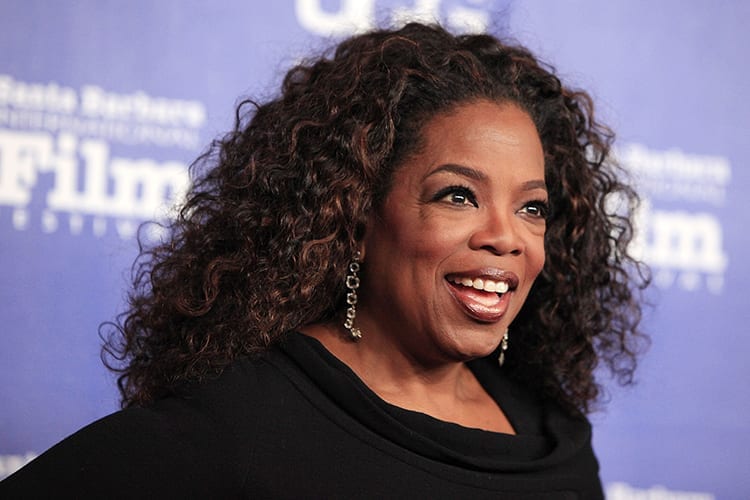 Oprah Winfrey is arguably the most famous African American woman on the planet, and she is certainly one of the wealthiest. Currently the CEO of Harpo Productions and the OWN Network, Winfrey’s net worth is estimated at nearly 2.6 billion dollars. Winfrey made her fortune as the producer of her own daytime talk show which was syndicated nationally and around the world for nearly 30 years. Despite stepping away from her program in 2011, her media empire shows no signs of slowing down. Winfrey is currently executive producing a biopic about comic Richard Pryor, and in 2018, she starred in the critically acclaimed film A Wrinkle in Time. Oprah.com receives more than 70 million page views per month, and O, The Oprah Magazine has a circulation of more than 2 million. Oprah has consistently been named as one of the most influential women in the world by media outlets such as Time and CNN, and her dedicated philanthropy has made as many headlines as her accomplishments in television and film. In 2010, she donated $10 million dollars to rebuilding efforts along the Gulf Coast following Hurricane Katrina. In 2007, she founded the Leadership Academy for Girls in South Africa, and regularly communicates with the students via satellite.